I haven’t made this dessert in a couple of years, but it is one of the best uses for pumpkin out there. I was telling Jeff about it last night, because the first time I made it, I  think I made it 4 times in one month.  A little overkill, I know, but it’s fairly simple and really delicious. Besides, it’s November; don’t we all need more ways to bake pumpkin?

Meanwhile, prepare caramel sauce:
Whisk brown sugar and butter in heavy medium saucepan over medium heat until butter melts. Whisk in cream and stir until sugar dissolves and sauce is smooth, about 3 minutes. 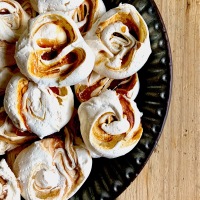